How Engineers Will Create the Future of Oil and Gas

How Engineers Will Create the Future of Oil and Gas

Dr. Helge Haldorsen, the 2015 President of the Society of Petroleum Engineers (SPE International), presented a riveting talk on the role of engineers and scientists in ensuring the future of the oil and gas industry.

As the January 12 Keynote Speaker for the 2016 Winter Enrichment Program, Haldorsen’s provocative talk title, “How Can Global Oil and Gas Industry Survive the Next 85 Years”, drew a large audience of over 400 KAUST students, faculty, administrators, and members of the broader KAUST community.  Haldorsen began his talk expressing the concern many feel about huge shifts in commodities prices, particularly with hydrocarbons, outlining the many technology changes taking place around the world—such as advancements in alternative or renewable energy sources—and the challenges this places on the upstream or exploration and production sector of the oil and gas industry.

“KAUST can help the E&P industry navigate to success,” said Haldorsen.  He explained that this will happen by addressing 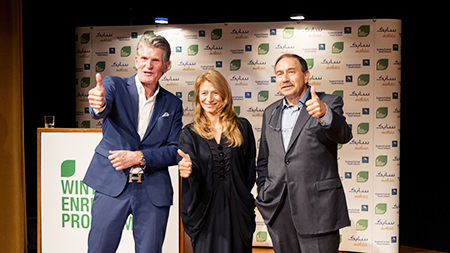 One of the biggest challenges facing the industry is time, said Haldorsen.  “The G7 Group has stated the ambition of phasing out oil and gas use by the year 2100.  That’s only 85 years away!”  Haldorsen explained that as the global population grows, so too will its need for additional energy, and this is where engineering and science innovations come into play.

It’s not that the challenge to phase out oil and gas use is a threat to the industry, it’s the challenge of extending the life and ultimate recovery of known reserves throughout that entire timeframe.  Haldorsen says that science and engineering, not policy, will provide the solutions.

“The future of energy and hence of the planet, depends on STEM and innovation,” said Haldorsen.  “Scientists and engineers took us from flint arrowheads to the moon and I am not for a second worried about the future. Mankind's ability to adapt and change will see us safely through the fossil fuel age to a prosperous low carbon future where everyone once again will clearly see the 'upsides in endings'. This is 'creative destruction' on a planetary scale made possible by tiny hard-working electrons!”

The presentation generated numerous questions and comments from the audience and sparked dialog throughout the KAUST community.  ANPERC is honored to have played a roll in bringing Dr. Haldorsen to share his ideas and insights.

Dr. Helge Hove Haldorsen currently holds the positions of Director General Statoil Mexico in Mexico City. Helge has an MS in Petroleum Engineering from The Norwegian Institute of Technology in Trondheim and a PhD in Reservoir Engineering from the University of Texas at Austin. Helge was a Second Lieutenant in The Royal Norwegian Navy and held various positions within reservoir engineering at Esso Exploration Norway in Stavanger, Sohio Petroleum Company in San Francisco and Anchorage and The British Petroleum Company in London. Helge joined Hydro in 1987 and held a number of key management positions with the company: Chief Reservoir Engineer, VP Exploration & Research and President E&P International. After the acquisition of the Houston-based independent Spinnaker by Hydro in 2005, Helge served as the President until the merger with Statoil in October 2007. Helge has served on the Society of Petroleum Engineer's (SPE) Board of Directors for three years and he has been an SPE Distinguished Lecturer and an SPE Distinguished Author. He has written many technical papers and articles, given keynotes all over the world and he has been a Professor of Industrial Mathematics at the University of Oslo as well as a lecturer at Stanford University. Helge was the 2015 SPE President and he received the American Association of Mechanical Engineers (ASME) Petroleum Industry Leadership Award for 2013.